Posted at 01:09h in Restaurant by admin 0 Comments
4 Likes
Share 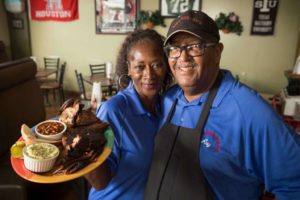 Fly Girl Foodie is on the go again! This time we’re visiting Ray’s BBQ Shack in my hometown of Houston Texas! I first learned about Ray’s through my parents when I saw a local news segment featuring Ray’s establishment. During the segment, I noticed my parents being interviewed about the amazing food they were enjoying. I then called Moms and Pops to get the scoop on the fall-off-the-bone ribs, 3-meat plate with ribs, chicken & sausage accompanied by homemade potato salad and cucumber salad. Now, you must understand that my Pops is a BBQ master in his own right. One of my favorite childhood memories was playing as my Dad barbecued on his pit! Dad told me, “Get over here ASAP! The food is OFF THA CHAIN!”  This was the seal of approval I was looking for. The following day I paid Ray’s a visit. Immediately, I reviewed their extensive menu and was highly impressed. Their menu not only offers BBQ but also offers burgers, seafood, stuffed potatoes, melt-in-your-mouth desserts and so much more. I literally ordered one of everything! All of their food is made-to-order, perfectly seasoned, and hurt-yourself-good! If you are ever in the Houston area please treat yourselves to Ray’s BBQ Shack!

Ray’s Real Pit BBQ Shack, “Smokin’ Good with a Whole Lotta Soul,” is a family owned and operated restaurant that has become a staple in Houston’s Third Ward and Riverside communities. Known for its hickory-smoked meats served with homemade sides and desserts all made fresh daily, the restaurant also serves burgers, salads, soups, po’boys, baked potatoes and fish and shrimp dinners in a casual and relaxed dining room. Located at 4529 Old Spanish Trail in South Houston since January 2011, the soul food destination/barbecue hotspot is less than a mile from the Medical Center, University of Houston (main campus) and Texas Southern University. Hours of operation are Monday through Saturday, 11:00 a.m. – 8:00 p.m. and closed on Sunday. Ray’s offers drop-off and full-service catering for all occasions, providing reliable, professional service with consistently great food at a reasonable price.

As co-owner and “official pittmaster” of Ray’s Real Pit BBQ Shack, Rayford “Ray” S. Busch is the heart and soul of the barbecue destination, providing the love, passion and patience needed to run a successful restaurant. He first learned the craft and trade from local Third Ward legend Mr. River Falls, gaining great skills and knowledge about the art of barbecue. In 1985, Busch began to run and operate his own barbecue food truck outside popular nightclubs. After gaining such a large following over the years, he decided to quit his “day job” in the Harris County Sheriff’s Department. In 2011, he joined forces with his longtime high school friend, Maxine Davis, to pursue his dream of opening a brick and mortar location of Ray’s Real Pit BBQ Shack. At the Old Spanish Trail location, Ray works closely with his team specializing in hickory-smoked meats and homemade barbecue, Cajun and soul food dishes, sides and desserts – all made fresh daily. A native Houstonian and hard working family man, Ray has managed to keep the business in the family with his daughter, Raylena Busch, acting as Line Cook Supervisor and an instrumental part of the restaurant.

They’ll be happy to bring the intense flavors of Ray’s Real Pit BBQ Shack to you and offer drop-off and full-service catering for all occasions, providing reliable, professional service with consistently great food – all at a reasonable price. 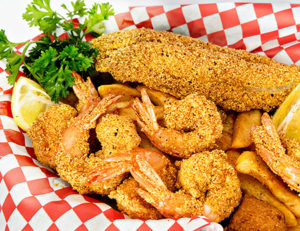 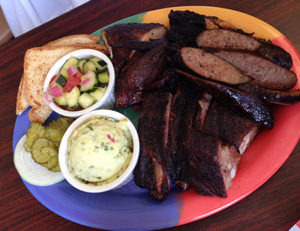 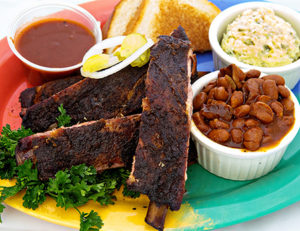