Posted at 22:08h in Restaurant by admin 0 Comments
5 Likes
Share

Fly Girl Foodie is on the go again, this time taking you on a tantalizing journey to Perry’s Steakhouse & Grille in my neighborhood Sugarland, Texas. Perry’s is my favorite steakhouse for many reasons! The incredible service, food, and atmosphere will have you coming back for more. All items on the menu are fresh and flavorful but my palate was wonderfully pleased with the Fresh Pineapple and Ginger Mojito, Truffle Buttered King Crab and New York Strip, Jumbo Lump Crab Cakes and Perry’s Famous Pork Chop. The Pineapple & Ginger Mojito was indeed fresh and bursting with citrus flavors. The Cherry Pepper Calamari was flash fried to perfection and amazingly delicious. The main course was Perry’s Famous Pork Chop with Sweet Sriracha Brussel Sprouts and It was literally a partying my mouth that I didn’t want to end. This visit was very special because me and my husband were celebrating our 10 year wedding anniversary and the friendly and attentive staff made us feel as though we we’re the only people in the restaurant! Next time you’re in the Sugarland Texas area Perry’s Steakhouse is definitely a must go see and do!

The Perry family opened its first restaurant in 1979 in Southeast Houston as a modest meat market called Perry’s Butcher Shop and Deli. In 1986, Chris Perry persuaded his father Bob to add dining tables, which eventually led to an expansion and the opening of a second market. As the markets gained popularity, Chris opened Perry’s Steakhouse & Grille in 1993. The original two butcher shops are also still in operation as Perry & Sons Market & Grille.

Now known as one of the country’s premier, award-winning steakhouses with 13 locations in Denver, Chicago, Birmingham and across Texas, Perry’s remains true to its roots with a famously mouth-watering pork chop, Prime USDA-aged steaks and Chateaubriand tableside carvings. Other favorite items include the Perry’s hanging symphony kabob, southwest filet, fried asparagus with lump crab, signature steak additions and flaming desserts.

Perry’s towering wine wall offers hundreds of carefully chosen wines, including rare vintages from all major wine regions of the world and Perry’s own private label reserves. Their cocktails complement the menu with ingredients fresh from the kitchen to the bar, such as their signature Mini Martini Trio flight. A craft beer selection is also provided to round out the beverage menu.

An unexpected steakhouse specialty, Perry’s Famous Pork Chop is a mouth-watering prime chop measuring seven fingers high — just as butchers measured back in the day. Sourced from choice midwestern farms, their hand-selected chops are butchered in house from the pork loin. Sweet, smoky and sizzling, it’s rubbed with proprietary seasoning, cured and roasted on a rotisserie with pecan wood for up to six hours. Upon order, the chop is glazed, caramelized and topped with Perry’s signature herb-garlic butter, then carved tableside. A recipe perfected for over 38 years, the pork chop is plated as three portions: the “eyelash” (the most marbled, tender, melt-in-your-mouth section above the eye of the chop), three baby-back ribs and the center-cut loin.

Outside of Perry’s four walls lies a community, rich with flavor. These communities, like Perry’s, understand that growth takes discipline — but more importantly, it takes support. So in honor of Perry’s humble beginnings, they chop through each grand opening ribbon with the iconic Perry’s meat cleaver. And once the doors have opened, the cleaver rests in a deli display case to remind the team of how far they have come — all thanks to every customer! 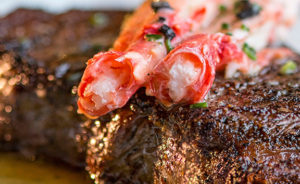